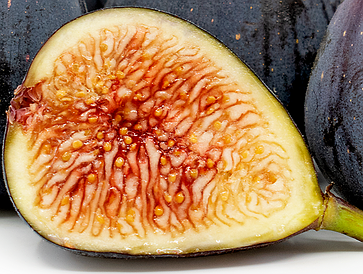 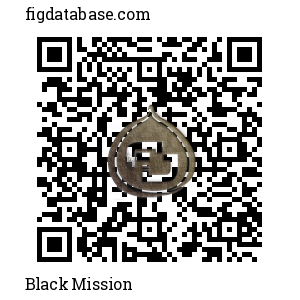 The Mission fig (also known as Black Mission or Franciscana) is a popular variety of the edible fig (Ficus carica). It was first introduced to the United States in 1768 when Franciscan missionaries planted it in San Diego. It was also planted in the subsequent missions that the Franciscans established up the California coast. Gustav Eisen writes, "The early padres and missionaries in the Pacific coast States cultivated no other variety of fig". It later became the main commercial variety planted throughout California. The Mission fig was later surpassed by the Sari Lop fig (also known as Calimyrna) as the most popular commercial fig variety grown in California.

The Mission fig is a high quality fig variety. It produces both a breba and main crop, and is considered an everbearing variety when planted in the right climate. The breba crop is large. The main crop is medium-sized. It is a dark skinned fig with a strawberry colored interior. The skin of the fruit often cracks when it is ripe. The tree is long lived and grows to be quite large. It is sensitive to frost. Mission fig trees are almost always infected with Fig mosaic virus, which can affect the color and shape of leaves, but usually does not affect fruit production. It is still considered one of the highest quality figs that can be grown in USDA zones 9 and up in the United States.

Black Mission is a very widely planted fig. It has large fruit and a heavy crop. Very sweet berry flavor. Almost always has cracking of the skin when ripe, I tend to think of it as a later season fig requiring some heat, but it is heavily planted along the coast, near the beach in what is often our fog belt, so I assume it must be working there. Some of the coastal trees are 75+ years old. Leaves usually have some pinkish hue in the leaf stem, vary widely in their shape and are usually somewhat thin and floppy.

California Rare Fruit Growers, Vol. 23, No. 6, December 1991: Medium, black skin, reddish pulp. Used fresh and dried. Has strong fig flavor. Good at coast. Has both a breba and a second crop. Oldest California fig, originally from Spain. Info. from Commercial Dried Fig Production in California, University of California, Leaflet 21051, p. 6, November 1978: Mission came to California from Spain. Tree reaches a larger size than most varieties. It produces both breba and second crops. Fruits of the breba crops are large, and many are shipped to the fresh market. Some breba figs are dried, but their shape relegates this fruit to manufactureing stock. Second-crop figs are much more numerous, smaller, and rounder. Fruits are marketed as whole figs, fig paste, and juice. Leafs out about 7 days after Adriatic. The breba crop matures before most other varieties, in mid-August to early September. Fruit splitting is minimal, and the eye is fairly tight, so fruit spoilage is seldom a problem.

The Franciscana (Mission) fig was introduced at San Diego about 1768 from mission stations in Baja California, and until the middle of the past century was practically the only variety grown in the early settlements. In 1882, West reported that it was too well known to need description, and added that it was the only black fig of his acquaintance that was of any value for drying. Eisen, in 1885, stated that this variety was not good for drying, but in later publications described it as a fig which dried well. In his bulletin of 1901 we read: “The general belief that the Mission is a distinct California fig is erroneous. We can no more lay exclusive claim to this fig than can Mexico and Chile. It was undoubtedly brought from Spain or Portugal at a very early date after the conquest.”

About 1909, Eisen identified the “Mission” as Franciscana, of Spain, but the exact reference to his publication has not been located. In 1925, Condit wrote, after personal observations in Spain: “The Franciscana is a black fig commonly grown at Estepona, over sixty miles below Málaga, on the coast. Dried figs of this variety seen at Motril appeared to be identical to the California Mission.” It seems to be the same variety that Escribano y Perez described in 1884 as Higuera Negra, of Murcia Province, where it was much esteemed both for fresh fruit and for drying. The following two introductions from Málaga into California have proved to be identical with the Franciscana: P.I. No. 58,664 as Negra, and P.I. No. 62,777 as Brebal.

Three varieties imported from England with the Chiswick collection, P.I. No. 18,875 as Biberaeo, No. 18,896 as Gouraud Noir, and No. 18,868 as Reculver, also produce fruit like that of the Franciscana. The first two are described by Eisen as distinct varieties, but the characters listed by him coincide almost exactly with those of the Franciscana. According to E. A. Bunyard (1925), the name Reculver comes from Reculver, Kent, England, where this fig was introduced by the Romans. Dean, in 1904, described Reculver as a prolific fig tree with small, purple fruits.

Another introduction of the Chiswick collection, P.I. No. 18,867, labeled Douro Vebra, bore fruit very similar to the Franciscana. According to Barron (1891), Douro Vebra is the same as Biberaeo. In the original notebook of John Rock, Niles, dated 1895, there are outline drawings and notes of California Black, Biberaeo, and Reculver. Under the short description of Reculver there appears this line in the handwriting of Gustav Eisen: “Leaves mottled, as on Mission.” This unpublished note, we might point out here, is probably the first observation made on the occurrence of a leaf mosaic on the fig in California.

Although it appears strange that Eisen should not have considered the above three kinds to be the same as Franciscana, they are being treated here as identical with that variety.

The Franciscana fig has long been grown in the eastern and southern United States. Trees have been observed on the original Arlington estate of the Custis family near Cape Charles, Virginia, and on a neighboring farm; also at the Virginia Truck Experiment Station, Norfolk, and at the Hampton Institute. The probable reasons for the lack in popularity of the variety in these districts are the susceptibility of trees to frost damage, and their light productivity. W. S. Anderson reported in 1924 that in south Mississippi, “the Black Mission was injured more than any other variety by the cold, and produced very few fruits.” On the other hand, the fruit was of the highest quality, “standing up better when left on the tree during the rainy season than any other variety in the test.” Woodard (1940) showed that in Georgia, the Mission was much inferior to Celeste in fruit production. Wythes (1902) reported Gouraud Noir, or Dr. Hogg’s black fig, to be a fine flavored fruit, and excellent for pot culture in England.

Franciscana trees are widely distributed in California, both as individual trees and in commercial plantings. Immense specimens are found, especially in the foothills of the interior valleys (plate 5). The one figured by Condit in 1919 near Corning, with a trunk circumference of 13-1/2 feet, has disappeared; but there are others just as large, or larger. Another and older tree, still growing on the William Curtner place near Mission San Jose, is reported to have been planted about 1800. Mills (1918) tells of other large specimens. During seasons with unusually low temperatures, trees of this variety are more subject to injury than are trees of other commercial kinds, as pointed out by Shinn (1892) and Hodgson (1934). On account of the productive capacity of the trees, resistance of the fruit to spoilage, and excellent quality both fresh and dried, the Franciscana has long enjoyed an excellent reputation. The main objection to it commercially is the black skin color, which practically prohibits use of the dried fruit in fig paste.

The tree is a vigorous grower, with branches rather slender (plate 4), the larger often drooping to the ground and taking root at the tip; terminal buds are violet-brown. Leaves large, averaging 7-5/8 inches broad and 8 inches in length; lobes mostly 5, but sometimes 3, or on vigorous wood with each basal lobe auricled; upper surface somewhat glossy. Mosaic spots common and conspicuous on leaves and fruit, but seldom sufficiently serious to cause alarm on the part of growers. 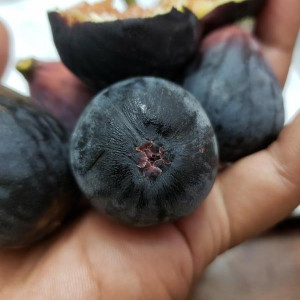 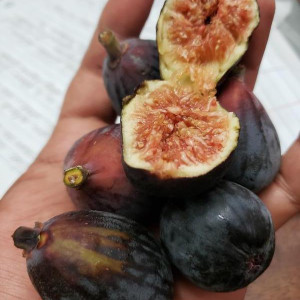 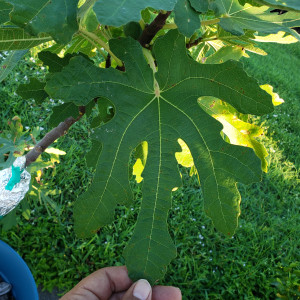 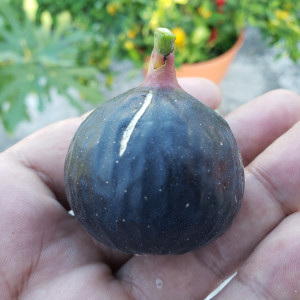 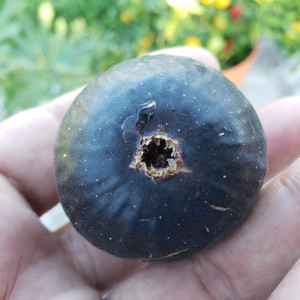 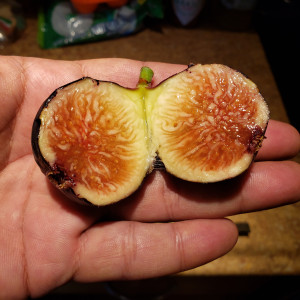 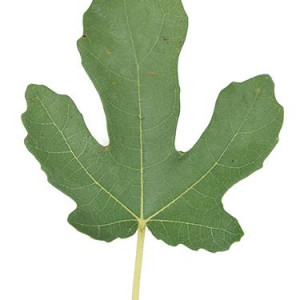 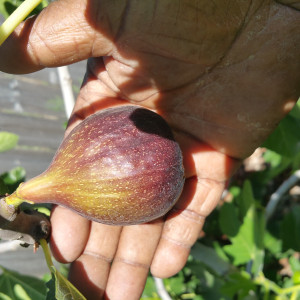 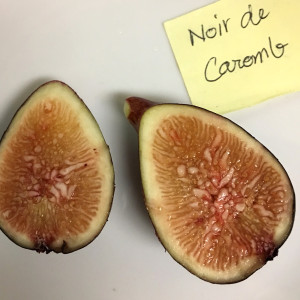 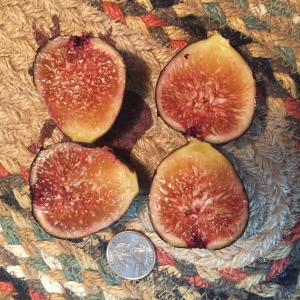